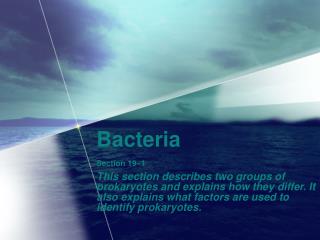 Bacteria Section 19–1 This section describes two groups of prokaryotes and explains how they differ. It also explains what factors are used to identify prokaryotes. Introduction What are prokaryotes? They are single-celled organisms that lack a nucleus. Introduction

Bacteria - . insulin production. use an (restriction) enzyme from bacteria to cut out insulin gene. insert the gene into

BACTERIA - . the oldest living structures on the earth. classification. living things can be grouped in three domains.

Bacteria - . bacteria. microscopic organisms that are prokaryotes make up two kingdoms of the classification system:

BACTERIA - . what is bacteria – a single celled organism that is a prokaryote three basic shapes of bacteria are

Bacteria - . bacteria. prokaryotic eukaryotic can be both. prokaryotic! bacteria are the only prokaryotes on earth!.