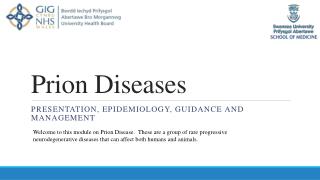 Prion Diseases. Presentation, Epidemiology, Guidance and Management. Welcome to this module on Prion Disease. These are a group of rare progressive neurodegenerative diseases that can affect both humans and animals. Overview. How to Use this Module? Learning Outcomes Prion Disease