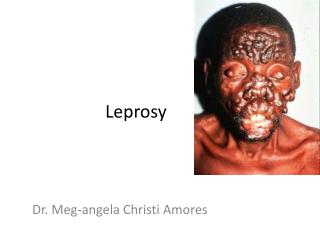 Chemotherapy of Tuberculosis - . tuberculosis. chronic granulomatous disease. usually affects the lungs, up to one third

TITLE: God’s Megaphone - . text: job theme: god uses suffering to make his will known to us and others.

Leprosy - . by: rj &amp; josh. what is leprosy?. leprosy is a infectious disease that is caused by mycobacterium

-HDP- Leprosy - What is leprosy? . leprosy is a chronic infectious disease caused by mycobacterium leprae, an acid-fast,

Jesus Cleanses A Leper - . luke 5:12-14 and it happened when he was in a certain city, that behold, a man who was full of

Leprosy (Hansen’s Disease) - . by: ms. jamie carey. leprosy-what is it?. leprosy also known as hansen’s disease is a