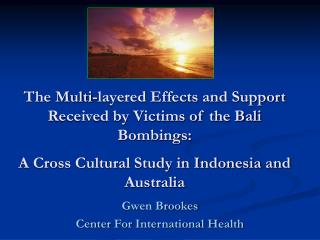 To Bali and Back Field Research in Bali and Perth Gwen Brookes Centre For International Health - . background. volunteer.

Gwen Stefani - . by meagan mongene. getting started…. gwen renee stefani was born october 3, 1969. as a child, she

Gwen Michaux - . reporter. job description. collect information and facts to present to the public, through

Center for International Understanding - . north carolina: the most globally engaged state in the nation website:

Gwen Gibson - What type of family structure are adopted children more likely to be adopted into? does this vary by

Gwen John - . artist of the month at griffeen valley educate together. early

Gwen Brooks - . gwendolyn brooks was born in topeka,kansas, in 1917 and raised in chicago. she wrote more than twenty

Center for Global Health - The un secretary general’s global strategy for women’s and children’s health: getting it

Center for Geriatric Health - . changing the