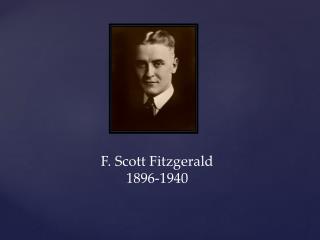 F. Scott Fitzgerald 1896-1940. Francis Scott Key Fitzgerald was born in St. Paul, Minnesota on September 24, 1896. His family lived in a building called the San Mateo Flats in a neighborhood that did not have electricity until 1911.

Introduction to The Great Gatsby - . published in 1925, the great gatsby reflects the lifestyle of 1920s post wwi era