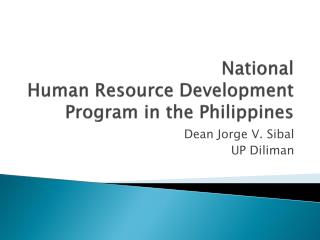 The Framework of the National Rural Water Supply and Sanitation Programme - . presentation to the. advocacy and

Integral Human Development - . a faith perspective. why i am here today. interested in seeing the connection between

Updates on AFMA Implementation (1999-2009) - . background. the landmark agriculture and fisheries modernization act, or

Capacity Development and Human Resources Component - . indicator. the percentage of the health workers who successfully