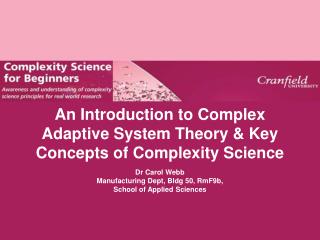 Experimental Complexity Theory - . scott aaronson. theoretical physics is to this…. as theoretical computer science is

Introduction to Computer Science Theory - . how complex is a program (or algorithm)?. algorithms is the study of what

The Immune System as a Complex Adaptive System: A RePast Simulation of the Anti-Viral Immune Response - . virginia a.

An Introduction to Programming Concepts and OI-programming - . …from abstract theory to dirty tricks…. objectives