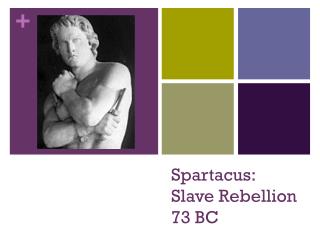 Spartacus: Slave Rebellion 73 BC. Who was Spartacus?. W as in the Roman army . He was sold into slavery and trained at the gladiatorial school in Capua, Italy. Contextualizing the Zapatista Rebellion - . february 3, 2000. the rebellion. january 1, 1994 the government reaction the

The Rebellion of 1857 - . dawn of new imperial era. origins of the rebellion. military causes: grievances over pay and

Spartacus - . the war. the after party . spartacus’ numbers grow quickly after his first major victory. rome sends a

Spartacus - . the start. spartacus’ wife. she was a prophetess of dionysus. she predicted that the dionysus had

The boxer Rebellion - . youtube, the boxer rebellion. take notes paying attention to the reasons given for the rebellion

The Whiskey Rebellion - . 1.16.14. swbat gather evidence about the whiskey rebellion by analyzing primary and secondary

The Tonghak rebellion - . causes and consequences. causes?. what was the chinese response to the rebellion?. support to

The Christmas Rebellion of 1831, Jamaica - . a picture of the parish of st.thomas where the morant bay rebellion