The kind of men we are today, will impact our descendants for generations. - PowerPoint PPT Presentation 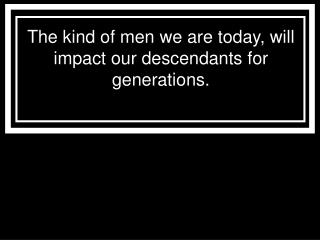 The kind of men we are today, will impact our descendants for generations.

The kind of men we are today, will impact our descendants for generations. It is a fundamental principle in God ’ s economy that the actions of individuals will affect the lives of their descendants. Allan P. Ross. Exodus 32.27-28:

The kind of men we are today, will impact our descendants for generations.

Pedigrees - . pedigrees. pedigrees show how a trait/disorder is passed from one generation to the next symbols: squares =

Activity 5 Genes and Traits - . early breeding practices. farmers realized thousands of years ago that if you only breed

Genetic Disorders Review - . what is the disorder?. chromosome 11 inability to manufacture melanin often shifting back

Patterns of Inheritance - . by observing how traits are passed to the next generation, how can the inheritance patterns

Genetics - Unit 9. genetics. what is genetics?. genetics is the study of heredity. heredity is how traits are passes down

In the punnett square above what would be the result of the offspring? - . all are expected to be tall. a male and

Do Now 2.3 - . objective: be able to describe some basic characteristics of drosophila , including their chromosome