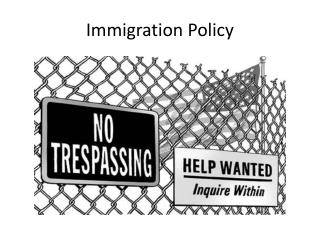 Where to Find the Law The USCIS Website: USCIS USCIS Laws, Regulations and Guides - The aabany immigration &amp;

AMERICA IN WORLD WAR II - . background. after wwi, americans had returned to their traditional policy of isolation more

Immigration and America’s Economic Future: The Case for Immigration-Centered Economic Development BREAKFAST OF

Immigration and America’s Economic Future: The Case for Immigration-Centered Economic Development - Presentation to

Unit 2: Trade Policy - . immigration 2/13/2012. bryan caplan. most of this lecture is based on the fff economic liberty

Chapter 3 - . socialization. chapter outline. what is socialization? learning to be human theoretical perspectives on

Dispersal and Immigration - . there are several fundamental processes in biogeography: evolution speciation extinction