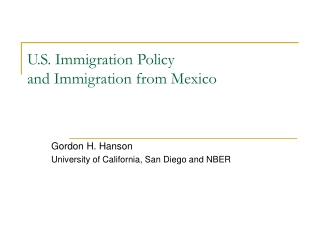 Immigration Policy and Immigrant Heath - . the impact of immigration policies on the health and well-being of immigrants

Immigration - . how did the immigration during the 19 th ~20 th century affect melbourne’s culture? catherine liu. the

The Immigration Debate - . the daily show :”immigration and the wwe” why would a wwe wrestler articulate his ideas

Chapter 7: Immigration and Urbanization (1890-1910) - . era of immigration. immigration means moving into one country

IMMIGRATION - . what is a faith-based organization to do?. the rev. anna lange-soto ablange@aol.com