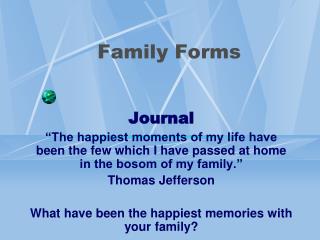 Family Forms. Journal “The happiest moments of my life have been the few which I have passed at home in the bosom of my family.” Thomas Jefferson What have been the happiest memories with your family?. Children living in blended families, including either a step-parent or step-sibling. String Instrument Family - . what does this family do?. who belongs in this family?. violin. viola. cello. string bass.

Family Planning - . ayşe arzu akalın, md. aim : the aim of this lecture is to convey general information on family

LEGAL FORMS JUSTICE HECTOR HOFILENA - . a short review in legal forms. do you know the most commonly asked forms in the

Rockefeller Family &amp; Rothschild Family: How did they get rich? - . by: delphine marini. rockefeller family: john

Falling in Love With Forms [Breaking Development Nashville 2015] - Forms. without them, the web would not be what it is

Falling in Love with Forms [BlendConf 2014] - In this session, we will explore forms from top to bottom, examining how

You Can Afford to be a Family Physician - . mark a. goedecker, m.d. york hospital family medicine residency clinical camp

FAMILY UPBRINGING - . our family. the family is the basic social unit in most societes. ideally, it provides its members