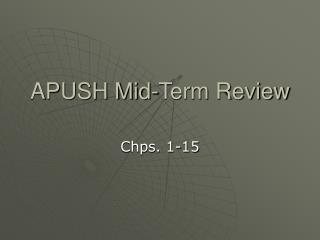 APUSH Mid-Term Review. Chps. 1-15. The Indian Empire that dominated modern Mexico at the time of the Spanish conquest was the: A) Mayan. B) Inca. C) Aztec. D) Chaco. The eastern third of what is now the United States was inhabited by the: A) Woodland Indians.

HONORS &amp; CP CHEMISTRY - . mid term exam review. 1. 1. how many atoms of hydrogen are present in 3 moles of acetic

Objective : DWBAT review the IA passage to compare and contrast the reigns of Romulus and Numa - . iii/xxii/mmxiii. do

Mid-Term Review - . biology 2013. scientific method and inquiry. 1. what is an experiment? what is an independent