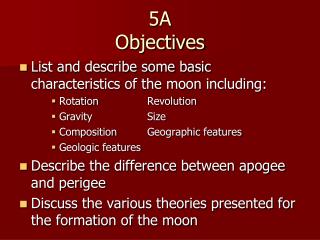 5A Objectives. List and describe some basic characteristics of the moon including: Rotation Revolution Gravity Size Composition Geographic features Geologic features Describe the difference between apogee and perigee Discuss the various theories presented for the formation of the moon. Module 5a - . incinerators and adsorbers. preliminaries. 1-minute paper: things you like about class helpful suggestions

Module 5A - . introduction strategies for working with clients with co-occurring disorders: guidelines for a successful

Module 5A - . introduction strategies for working with clients with co-occurring disorders: guidelines for a successful

Advanced 5A - . practice handbook key. 1 . if you had told me you were in trouble, i would have helped you. &gt; past

Group 5A - . acuity : (n) sharpness (particularly of the mind or senses) ex: the acuity of one’s hearing delineate :

powerpoint 5a - . the use of 3d space sayre chapters 13 - 15. t he third dimension. three dimensional media