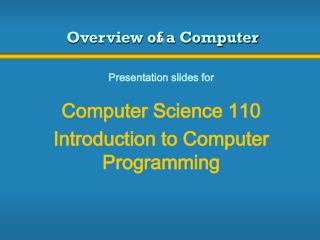 Overview of a Computer

Overview of a Computer

Computer Hardware - . in this lecture, we will study: the hardware components of an information system: cpu (central

Chapter 1 Overview of Computer Graphics - . objectives. to understand the basic objectives and scope of computer graphics

Overview of general computer structure - . computers are versatile. why? because it can be programmed to do more than one

Computer Parts Assignment - . reviewing the functions of each part.

Taking Care of Your Computer