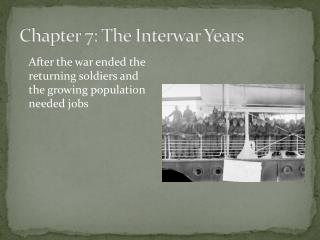 Chapter 7: The Interwar Years. After the war ended the returning soldiers and the growing population needed jobs. Many who could not find jobs moved away to Canada or the United States.

Chapter 8 - . marine fishes. the first vertebrates. fishes appeared more than 500 million years ago evolved from an

MATH PROBLEMS - . topic one. measurement, uncertainty, significant figures. the age of the universe is thought to be

Chapter 2 - . early farmers and city dwellers. producing food. before 10,000 years ago, all humans were hunters and

Social Studies 10 - . perspectives on globalization. “ to what extent”. meaning….how much…how many implying

Chapter 31 – A Search for Order - . section notes. video. a search for order. the nixon years from watergate to ford