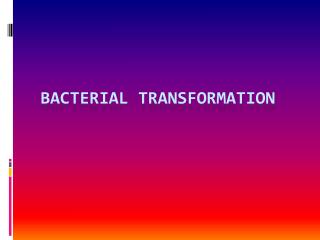 Bacterial transformation. Genetically Engineered Bacteria. It’s basically how scientists and researchers manipulate genes from one species into the genome of a bacterium Recall, DNA is the genetic material of all living organisms that carry genetic code that may code for proteins.

How many arrows do you see in the following shape? - . microbial growth. microbiology 2314. bacterial growth. bacterial

Bacterial Chemotaxis - . we will discuss the strategies of how bacteria swim towards food: o how do they detect the food

MANAGEMENT OF THE DIFFERENT TYPES OF BACTERIAL AND VIRAL CONJUNCTIVITIS PRESENTED BY - Dr duruewuru kyrian. outline

CHAPTER 10 Bacterial Genetics - . mutation and recombination, mutations and mutants. mutation is a heritable change in