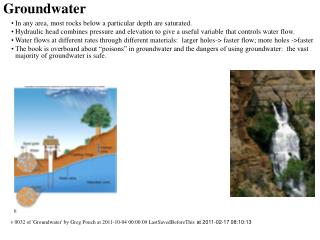 Groundwater. In any area, most rocks below a particular depth are saturated. Hydraulic head combines pressure and elevation to give a useful variable that controls water flow. Water flows at different rates through different materials: larger holes-> faster flow; more holes ->faster

Canwell 2004 - . overview of groundwater information found on the ministry of water, land and air protection web site. by

An Overview of Direct-push Well Technology for Long-term Groundwater Monitoring - Welcome – thanks for joining us.

Isotope Investigations in Wellhead Protection Areas - . jim walsh mdh. isotopes can tell us. how old is it? where did it

Groundwater - . of the roughly 350 billion gallons of fresh water withdrawn per day in us, 24% from groundwater 16

Sinkholes - . created by: marcous phillips. what is a sinkhole. a sinkhole is a depression in the ground that has no

The Science Behind BioShield - . let’s consider the issue of microbiological contamination of groundwater wells, which

Solute Transport in the Vadose Zone - . quantification of oozing, spreading and smearing. overview. much of the attention

Tonight: Climate Change and Potential Impacts on Wisconsin’s Lakes, Streams and Groundwater - Climate change in the