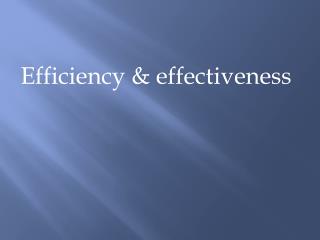 Efficiency & effectiveness. Davos 2012 The world, is sitting on a social and economic time bomb. The world is plagued by youth unemployment. In the UK the number of 16-24 year olds looking for work has topped one million. Excluding those in full-time education, the figure is over 20%.

Using Multiple Data Tools to Evaluate Our School's Effectiveness in Meeting the Needs of Different Groups of Student - S.

Cost Effectiveness: How Can We Do More With Less? - . stephen p. merry, md, mph, dtm&amp;h assistant professor of

The Cost-Effectiveness of Interventions in Health and Medicine - . william h. herman, m.d., m.p.h. university of