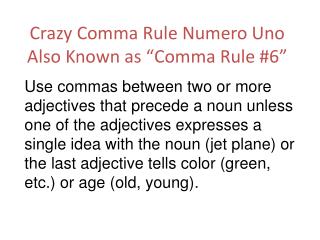 Crazy Comma Rule Numero Uno Also Known as “Comma Rule #6”. Use commas between two or more adjectives that precede a noun unless one of the adjectives expresses a single idea with the noun (jet plane) or the last adjective tells color (green, etc.) or age (old, young). Chapter 5: Probability - . 5.1 probability rules 5.2 the addition rule and complements 5.3 independence and the

Rank Size Rule - . settlement. learning outcomes. to understand what the rank size rule is and the pattern that it tries

Zhang Fan - Feeling the stone when crossing the river: china ’ s efforts and achievements in promoting the rule of law.