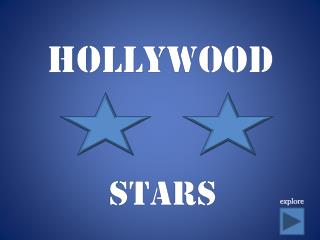 Hollywood. STARS. explore. There are millions of stars in Hollywood, but a few stand out. They fascinate us with their lives, entertain us with their movies, and enrich their profession with their talent. Here are a few that fascinate me. . home. go. James Stewart. Katharine Hepburn.