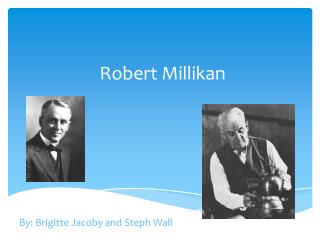 Robert Millikan. By: Brigitte Jacoby and Steph Wall. Robert Millikan's Background. He was born on March 22, 1868 in Illinois He died on December 19, 1953 Robert Millikan had 5 other brothers and sisters He went to Oberlin College in Ohio, as did both of his parents Robert Millikan - . by: autumn,rhett,julian,darien. …and his contributions to the atomic structure

Robert A. Millikan - The life of robert a. millikan . born on march 22, 1868 in morrison, illinoishis dad, silas

The Millikan Oil Drop Experiment - . measuring the elementary charge of an electron. introduction. no one has ever seen

-Electric Potential due to a Charged Conductor -The Millikan Oil Drop Experiment -Applications of Electrostatics - . ap