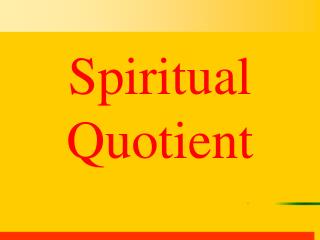 How Can Interactive Meditation Help You To Increase Spiritual Intelligence? - Harmony in the soul, body, and mind can Dr.Sapna Sharma Spiritual Counselor & Life Coach - Spiritual counseling is a spiritual approach to us and our blocks.

Spiritual Development Center - It has been found working with breath helps the mind. this is the most beautiful thing

WORK LIFE BALANCE is… - . achieved when an individual’s right to a fulfilled life inside and outside paid work is

YOU ARE AN INTELLIGENT MAN / WOMAN

Developing Your Spiritual Quotient - . we are a triune being- spirit, soul and body. iq - the brain’s (body) ability

Christians and Demons: An Amazing Compendium by Dr. Jerry Johnston --To Get Armed and Anchored For Spiritual Warfare