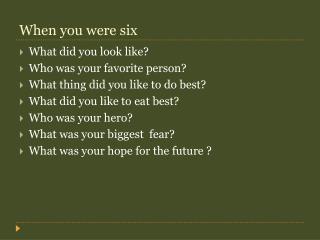 Where and when were you born? - . i .-       match the questions with the answers. write the right number en each

What happened when you were baptized? - . you became a disciple of jesus christ. matt. 28:18-19 apostles commissioned,

Peter… What Were You When I called You? - . listener and observer. witness. eves dropper. and what did you become?. a

I Knew You Were TROUBLE When You Walked In - . troublesome verbs. lie and lay. lie means “to rest in a flat

When Witches Were Waltzing - . one night i went walking out into the wood, and found i had wandered much more than i

Were You There When They Crucified My Lord - . heb 6:4-6 . . . since they crucify again for themselves the son of god,

You were there! - . personal narrative writing assignment. think of an event in us history between the time you have