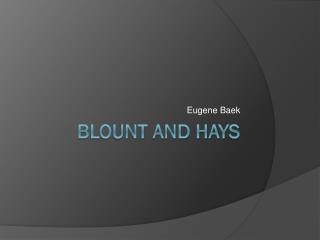 Eugene Baek. Blount and Hays. John: The Christology of Active Resistance. In John’s work, Blount finds his language symbolism to be the stuff of active, countercultural, communal resistance. One Can read John’s narrative in the light of its own social location. The Hays Code - . with help from: http://www.pictureshowman.com/articles_genhist_censorship.cfm

The Hays Code - . with help from: http://www.pictureshowman.com/articles_genhist_censorship.cfm

Anderson HAYS Cooper - . by:adam bilyea . family and hometown . he is from new york his dads name is wyatt cooper his