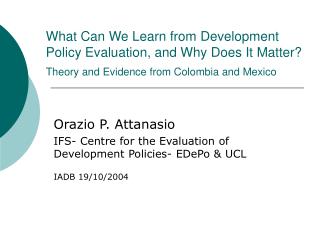 What Can We Learn from Development Policy Evaluation, and Why Does It Matter? Theory and Evidence from Colombia and Mexico. Orazio P. Attanasio IFS- Centre for the Evaluation of Development Policies- EDePo & UCL IADB 19/10/2004. July 28, 2004 World Bank Challenged: Are the Poor Really Helped?

Best Practices in Faculty Evaluation and Professional Enrichment - . a presentation for faculty and administrators at

12 th Symposium on Development and Social Transformation - . panel 2: the changing face of telecommunications and power

Evaluation Framework - . russ masco matt heusman. objectives. to understand the necessity of formal evaluation in the