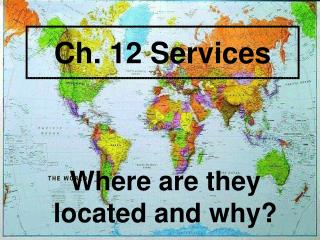 Ch. 12 Services. Where are they located and why?. Where are the Services?. Every settlement in a MDC provides consumer services to people in the surrounding market area/hinterland. However, settlements of different sizes have varied types and numbers of services. Early History of Services. Web Services and SOA for the RPG Developer on IBM i IBM Integrated Web services for i - . dan hiebert ibm

Web Services - 22. web services. objectives. in this chapter you will learn: what a web service is. how to create web

The Technical Services Stuff in IT Services - . a brief tour of the technical and service offering plethora – who