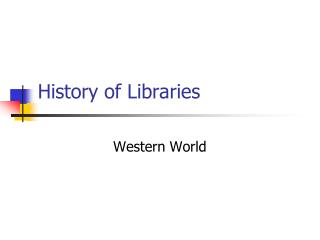 History of Libraries. Western World. Sumerian Information Technology – 3500 BC. Clay Tablets Written language was Cuneiform. Write Like a Babylonian. http://www.upennmuseum.com/cuneiform.cgi. Ancient Egypt – 3000 BC. Papyrus Made from the papyrus plant Written language was Hieroglyphs. Louisiana Libraries - . committed to the future of our state. the story of louisiana libraries is ultimately the story of

Digital libraries: A bit of history - . some historical perspectives and precursors. dl history? what?. is it a bit

Gaming in Libraries - . idea overview. ideas at conference. why games are important to libraries educational value of

34. University and Public Libraries - . we all have one near. let’s take the example of san diego libraries. search for