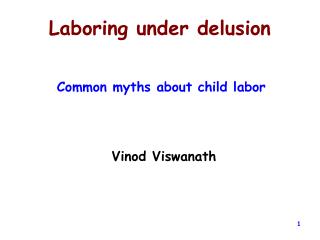 Laboring under delusion. Common myths about child labor. Vinod Viswanath. Child Labor in India. There are more children under 14 in India than the entire USA population Children under 14 form 3.6% of India’s labor force Of these, 9 out of 10 work in their own rural family settings

A Vision for Lordship and Laboring - . sep 3-5 se navigators laborers conference. vision what does god want? how is he