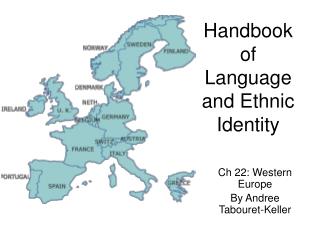 Handbook of Language and Ethnic Identity

Handbook of Language and Ethnic Identity. Ch 22: Western Europe By Andree Tabouret-Keller. The Present Concept of Western Europe. Eastern border of Europe is hard to define, and European Union is gradually expanding Eastward

Handbook of Language and Ethnic Identity

Putting XML to Work - . henry s. thompson hcrc language technology group university of edinburgh. when you see this, it

Welcome to “12 Strategies!” SELF STARTER: - . select one:. write down the one behavior strategy that you wish