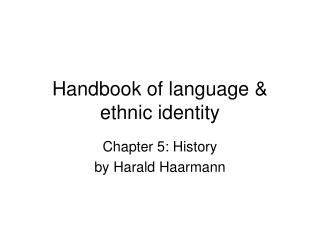 Staff Handbook - . updated: april 2013. welcome. welcome to george brown college! we are happy to have you as part of our

IDENTITY THEFT - . what is identity theft?. a legal definition . “a fraud committed or attempted using the identifying

How to use the OOTiA Handbook What should we consider when we go down the OO path? - . prepared for the sw der conference