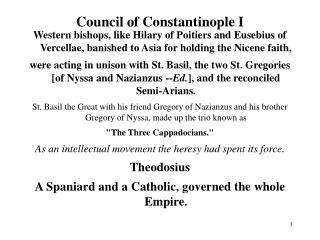 Council of Constantinople I

Council of Constantinople I. Western bishops, like Hilary of Poitiers and Eusebius of Vercellae, banished to Asia for holding the Nicene faith, were acting in unison with St. Basil, the two St. Gregories [of Nyssa and Nazianzus -- Ed. ], and the reconciled Semi-Arians.

Council of Constantinople I

CHAPTER 4 The Church Fathers And Heresies - The popes, the church fathers, and the ecumenical councils, led by the holy

Semi-Arianism - . when constans died (350), and his semi-arian brother was left supreme, the persecution of athanasius

Profession and Celebration: The Creed a nd the Great Thanksgiving - . the nicene-constantinopolitan creed result of the 2

Constantine the Great - . from constantinople to istanbul. england, york minster. outline. introduction part i. his life

Trinity &amp; Apollinarian controversy - . the divinity of the holy spirit. the doctrine of the trinity according to