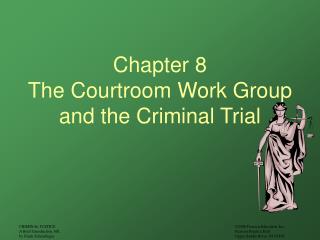 Chapter 8 The Courtroom Work Group and the Criminal Trial

Chapter 8 The Courtroom Work Group and the Criminal Trial

Criminal Justice Process: Proceedings Before Trial - . bail and pretrial release. bail- assure the court that the

Chapter 5 Work - . focal questions. what are the most important trends in the pattern of employment in britain today? why

Trial by Jury - . class 2. 7th amendment– u.s. constitution. “in suits at common law, where the value in controversy

Courtroom Lingo - . people in court. defendant - the person accused of a crime/ being taken to court. judge - government

Marty Martian: A courtroom trial about living t hings - . learning target. i can make a claim and support it with

Chapter 8 Courts and the Quest for Justice - . learning outcomes. lo1: define and contrast the four functions of courts.

Chapter 2 – Criminal Law - . a body of laws that deal with crime and the punishment of criminal offenses. what is a