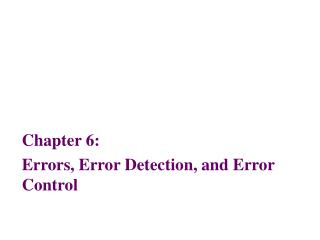 Chapter 6: Errors, Error Detection, and Error Control. Objectives. After reading this chapter, you should be able to: Identify the different types of noise commonly found in computer networks

Error detection and correction - . how can the receiver determine if there was an error in the message the sender sent?

Error and Control - . an ip datagram travels from node to node on the way to its destination each router operates

Error Detection - . error detecting codes enable the detection of errors in data, but do not determine the precise

Chapter 6 Errors, Error Detection, and Error Control - . introduction. all transmitted signals will contain some rate of