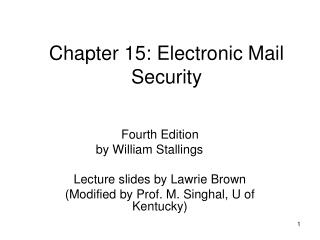 Chapter 15: Electronic Mail Security Fourth Edition by William Stallings Lecture slides by Lawrie Brown (Modified by Prof. M. Singhal, U of Kentucky) Email Security email is one of the most widely used and regarded network services currently message contents are not secure Pretty Good Privacy (PGP) - . by: melissa hudkins. outline. history of the software how does it work how safe is it who Chapter 12 Network Security - . viruses &amp; worms. there are many different types of viruses, such as parasitic,

Chapter 1: Fundamentals of Security - . jv note: images may not be relevant to information on slide. this chapter