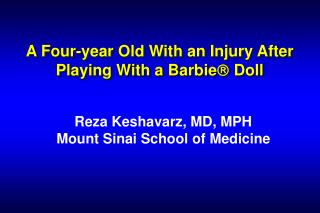 “Barbie Doll” by Marge Piercy - . figurative language. simile – a comparison using “like” or “as” metaphor

Barbie Bungee Jumping: Graphing and Extrapolating Data - . your mission. team members have been hired to work for the

The Story about Barbie in China - . why matel went to china and came home again what we take out of it for future

Instructions for Playing Jeopardy - . click on the question that you want to attempt, example $100 read the question and