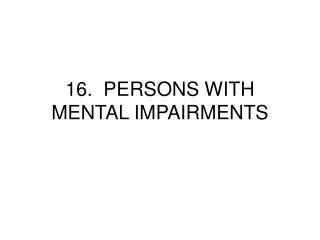 16. PERSONS WITH MENTAL IMPAIRMENTS . Note to Instructor: Commission Course, “Mental Health Officer” (#4001) can be used as a supplement. Unit Goal 16.1: The student will be able to summarize the issues involving persons with mental impairments at a jail facility. .

Accommodating Challenges Faced by Persons with Psychiatric Impairments - . below are some practical solutions to

Interviewing Persons with Disabilities or Mental Illness - . chapter 9. profile of the impaired population.

Interviewing Persons with Disabilities or Mental Illness - . chapter 9. profile of the impaired population.

From service to learning technology for persons with sensory impairments - . lennox adams ailsa macleod. model of using a

Collaborating with Families of Persons with Serious Mental Illness - Working together to manage mental illness.

AT for person with vision impairments AT for persons with limited hearing Communication Mobility - Motor vehicle.

Interacting with Persons Who May Have Mental Health Issues - . our goal. law enforcement liaisons. m. our mission.