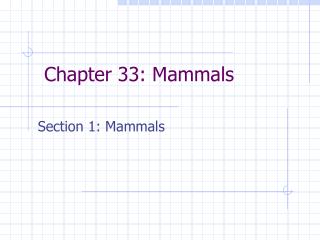 Chapter 33: Mammals. Section 1: Mammals. Mammals. Includes many diverse species that vary greatly in appearance Range in size from a tiny mouse to a huge elephant Mammals can be found flying in the air, running along the ground, and swimming in the sea