The Debate Over Missile Defense in Europe - PowerPoint PPT Presentation 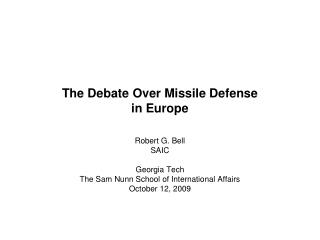 The Debate Over Missile Defense in Europe

The Debate Over Missile Defense in Europe

The End of Mad? The Nuclear Dimension of US Primacy - . by keir a. lieber and darly g. press presented by: fouzia amin.

WAVES OF CONTROVERSY OVER WEST GERMAN REARMAMENT - . in 1950 adenauer opens talks over german rearmament within a

Chapter 38 - . the bipolar world. the collapse of the soviet union and european communist regimes. the “kitchen

the Brink of Destruction - . nearest the us and ussr came to nuclear holocaust. communists’ “scientifically”

Ch 30: Kennedy and the Cold War - What did kennedy face: spread of communism threat of nuclear war the candidates:

NATO and the Warsaw Pact - . origins and implications on the cold war. nato – what is it?. north atlantic treaty