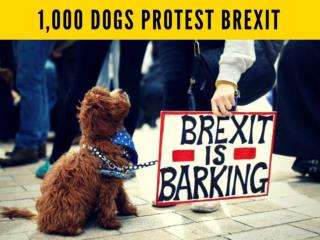 Around a thousand dogs and their owners put their best feet - and paws - forward as they march on Britain's parliament. They were demanding an end to Brexit via a second vote on the terms of the country's exit from the European Union. Organisers of the so-called 'Wooferendum' campaign argued that animals would suffer from leaving the EU. Brexit - As well as a hand out on goods the uk would like one on services, which are a large part of its