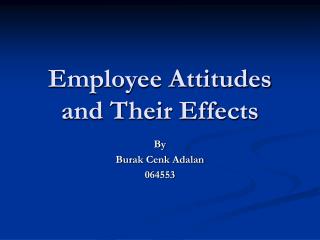 Employee Attitudes and Their Effects Employee Attitudes and Their Effects

The Role of the HR Manager - . determining need for new employee determine how many people needed to open, how many for

What is it? - . plan by which an employer defers employee compensation and pays it to the employee’s designated

Block Schedules vs. Traditional Schedules And Their Effects On Science Achievement, Inquiry Skills and Attitudes - Ng

Block Schedules vs. Traditional Schedules And Their Effects On Science Achievement, Inquiry Skills and Attitudes - Ng

Who Leaves, Where To, And Why Worry?: Employee Mobility, Employee Entrepreneurship, And Effects On Source Firm - Ce.

Attitudes - . an attitude is a positive, negative, or mixed reaction to a person, object, or idea. attitudes can be based