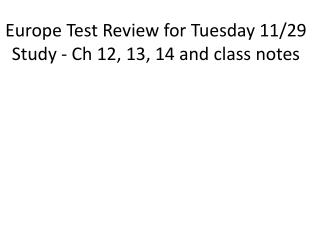 C 18 Test Review Notes - . the study of organisms requires the use of both large and small categories of organisms.

How to Study for Dr. Maynes’ Chemistry Tests - . and get a’s. notes. you do take class notes, don’t you? helps to

Test Taking Strategies - . how do i show what i know?. one week before test. gather all material for test lecture notes

C22 Test Review - . study guide place these notes into your biology notebook. a biennial is smaller during its first

Much Ado About Nothing - . test prep. this powerpoint is designed to help you review for the upcoming test. use your

Tuesday, February 18 th - What is the range of the upper 75%? what number represents q1. tuesday, february 18 th. eoct

Review for Chapter 5 - . passing through the great basin. this is a no gum class. please dispose of it properly!. bell

Warm-Up 4/28 - . complete the review sheet in the following order: individually, without your notes then, with your notes

CSH 2009-2010 - . a short review of creating objects in memory using test classes. what is a test class?. class used only