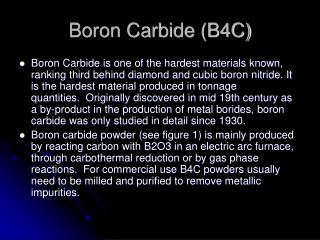 Boron Carbide Powder Suppliers - It is an extremely hard, synthetically produced material that is used in abrasive and

Boron - B5 10.881 . boron. facts of boron. boron is a rockets igniter and used in pryotechnic flares boron compounds are

Boron - . by aubrey hurst. boron’s basic info. boron is a metalloid. it’s atomic number is 5. it has 5 protons and

Boron Autobiography - . by: patrice ann frank. general information. i am a proud family member of the boron family in