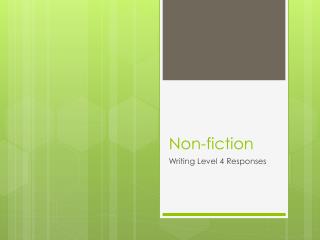 Non-fiction. Writing Level 4 Responses. Activate what you already know: What background information are you bringing to this reading. Some questions are assessment for learning—you are increasing your ability to tackle the reading just by answering the question!

Author: Jules Verne Genre: Science Fiction - . big question: how do we explore the center of the earth?. small group

Author: Debbie A. Taylor Genre: Realistic Fiction - . big question: what unexpected influence do we have on those around

Fiction Day at OPS Institute - A day of fiction at ops institute. book story or life

Teaching reading strategies with non-fiction texts - . programme. what happens in our reading

Jeopardy! (Non-Fiction and Grammar Edition!) - . titanic: 100. from what city did the titanic leave and in what city was

Week 4 - . sci fi notes – which of these did you see in the story – explain and give specific examples:. • science