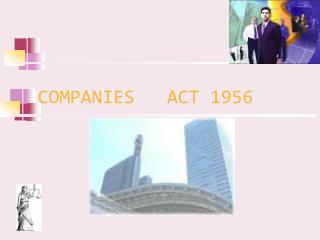 THE COMPANIES ACT 1956 - . as amended up-to-date important sections in this act. sections to be remember. sec 75 : return

Section 297 Companies Act, 1956 - . board's sanction to be required for certain contracts in which particular directors

The Revised Schedule VI To The Companies Act, 1956 - . ca anil mookim d h a n b a d. point of discussion. pre-revised

REPORTING REQUIREMENTS FOR AUDITORS UNDER SECTION 227 OF THE COMPANIES ACT, 1956 - . presentation by ca. anil sharma.

Companies Act 1990 - . next slide. purpose. this act outlines the procedures to be followed, when setting up, running and

New Companies Act - . salient features of importance to the industry and opportunities / critical risks to the chartered

Companies Act 2013 - . why a new companies act ?. the existing law is over half a century old new law helps to