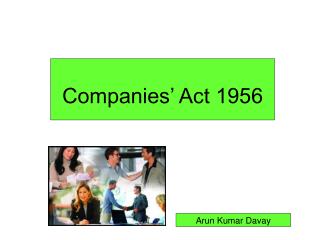 Companies’ Act 1956. Arun Kumar Davay. Indian companies Act 1956. According to section 3(1) (i) of The Companies Act, 1956, “Company means a company formed and registered under this Act or an existing company”.

The Middle East from 1956 - . history 12 ms leslie. since the creation of israel the arab reaction has been a problem

Learning Objectives - . at the end of the lecture students should be able to: identify, defined and differentiate

Chapter 16 - . mutual funds, insurance companies, investment banks, and other financial firms. to explore the many roles

How I do the atrial switch operation ? - . thaworn subtaweesin siriraj hospital . transposition of the great arteries.