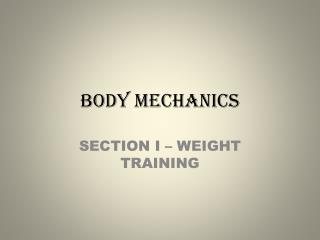 BODY MECHANICS. SECTION I – WEIGHT TRAINING. Purpose . To understand how the human body moves and functions. To gain insight into the bodies abilities and limitations. I) Weight Training. A)Proper Technique Lift Safely Lift with a partner whenever possible. BODY MECHANICS - . the way in which the body moves and maintains balance with the most efficient use of all its parts.

Body Mechanics - . the back you save can be your own. posture counts!. head up shoulders back chest out stomach and

Proper Body Mechanics - . reviewed december 2012. body mechanics. the use of one’s body to produce motion that is

Proper Body Mechanics - . body mechanics. the use of one’s body to produce motion that is safe, energy conserving, and

Body Mechanics/Positioning - . during the past few years employees have suffered shoulder strains, back strains, cuts,

Body Mechanics and Safety - . fundamentals unit 4. body mechanics and safety. describe what “base of support”