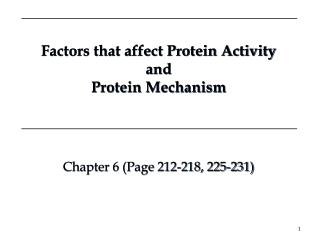 Lecture5-Enzyme activity - . enzymes: have an active site where substrates bind and are converted to products active

chapter 5: Enzymes - . structure &amp; function of enzymes. enzymes are made of proteins it catalyzes reaction by

Mechanisms of Enzyme Action - . what you need to know. understand the importance of and need for enzymes in biological

What are the factors affecting Enzyme Activity? - . recap. what are enzymes?. biological catalysts made up of proteins.

Lecture 4: Factors affecting enzyme activity: [substrate] and inhibitors - . how can we mathematically describe