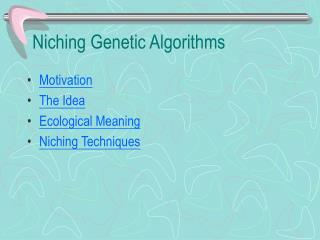 Who am I and what am I doing here? - . allan tucker a brief introduction to my research www.brunel.ac.uk~cssrajt. outline

Using Matlab Global Optimization Toolbox for Genetic Algorithms - . ranga rodrigo april 6, 2014 most of the sides are

Introduction to multi-objective optimization - . we often have more than one objective this means that design points are