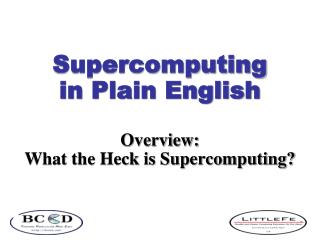 1 / 56
Download Presentation
Supercomputing in Plain English Overview: What the Heck is Supercomputing?
152 Views

Supercomputing in Plain English Overview: What the Heck is Supercomputing?. Outline. What is a supercomputer/supercomputing? Van Neumann architecture vs. Flynn’s taxonomy What is m emory hierarchy all about? What is parallel programming/computing? Serial vs. parallel Real world examples What the Heck Is ? - Water damage may happen in ways that are observable. in conclusion, it can be quite a significant Happiness That Comes By Wearing Plain White T-Shirts - No matter how hard all the fashion designers try, they can never

Rrrrrr…… now we know what it is but how the heck do you use it? - . andrew trant pps arctic - labrador highlands

An Overview of English Sentence Patterns - . in its simplest form, an english sentence has two parts: a subject, and a

The Future of Supercomputing - . dr. peg williams svp, hpc systems. simple view of the world of computing. the

Plain, But Not Simple - . the puritan sect and its influence in early america. historic perspective. henry viii begins

Sarah Plain and Tall - . web quest compiled by mrs. kane. sarah plain and tall. as you read, jot your thoughts on

Sarah, Plain and Tall by Patricia MacLachlan - . chapters 1-2 caleb and anna’s mama died the day after caleb was born.